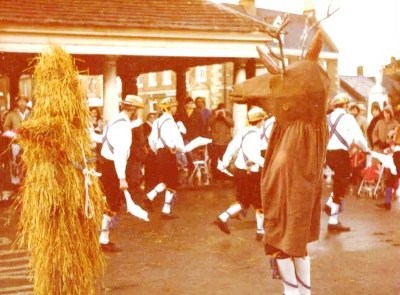 PM, the Bear, and our first animal "Sylvester" in Whittlesey Market Place, 1982

Peterborough Morris (PM) has a long association with the revival of the Whittlesey Straw Bear. This event was revived by the Whittlesea Society in 1980; in particular Brian Kell, who also danced with us. We had only recently been formed and were not ready to dance out for the first Straw Bear. However PM members Pete Shaw, Pete Stafford-Honeyball, and Geoff Phillipson were there as members of Northampton Morris Men. From 1982 to the present day we have danced at every Straw Bear.

We process on Straw Bear day to the dance "Winster Processional". From our position at the front of the procession, we soon found that the usual Winster tune and tempo clashed with that of the Bear Band. So we adjusted the dance to fit the Bear tune. Nowadays, we are usually out of earshot of the Bear Band, but we continue our practice of dancing to the Bear tune.

In 1980, a single musician, PM member John Riley, played for the Bear. Since then, the musicians have been led by Pete Shaw (PM founder and member for many years). Up to 1985, photos show that the Bear Band were PM musicians with Peterborough Morris dancing close behind. The band increased in size over the years and from 1986, photos show that the Bear Band is separated from PM dancers and musician. Regular PM members in the band (as seen in archive photographs) were:-
Dave Martin (bass drum), 1985 to 1991. Colin Turner (melodeon), 1990. Pete Puxty (melodeon), 1982 and 1985. Mark Swingler (melodeon), 1984

PM decorated and pulled the plough in 1995; 2004, 2006, almost certainly other years as well. PM member John Trickey was one of the regular decorators; he attached decorations with wire and, as an electrician, was careful to use the correct colour code of green-yellow for earth.

PM organised the ceilidh for some of the early years. The band were mostly PM members, who in 1981 went on to form the "Dennis Cuddles Starlight Band".

The day following Straw Bear Day, there is a blessing of the plough service, alternating between St Andrew's and St Mary's churches. Since 1983 we have provided a Morris display as part of this service and have adapted dances to suit the restricted dancing space in the Churches.

This influential 1976 album was devised by Ashley Hutchings. The "A" side was devoted to Border Morris Dance and the "B" side featured East Anglian traditions, especially Molly Dancing. The tune adopted by the Bear Band immediately followed a spoken piece about the Whittlesey Straw Bear. What has this to do with Peterborough Morris? Not much - as the album was recorded some years before PM started dancing; but the musician on that track was Doug Sherriff who became PM musician around the time of the Bear's revival.


OTHER OUTINGS with PM links.

1984 Display at Stowmarket; archive photos show that the display included PM Kit.
1985 The Bear went to Cecil Sharp House with music provided by PM members.
1982 and 1987 The Bear appeared at “Dancing England” with music by PM members. (A show-case concert of traditional dance, Dancing England ran from 1979 to 1987 and was revived in 2017.)

Note - This page is based on photographs and the collective memories of dancers and friends, past and present. We are fairly confident about all this, but memories have gaps, so if you have more information, please let us know.